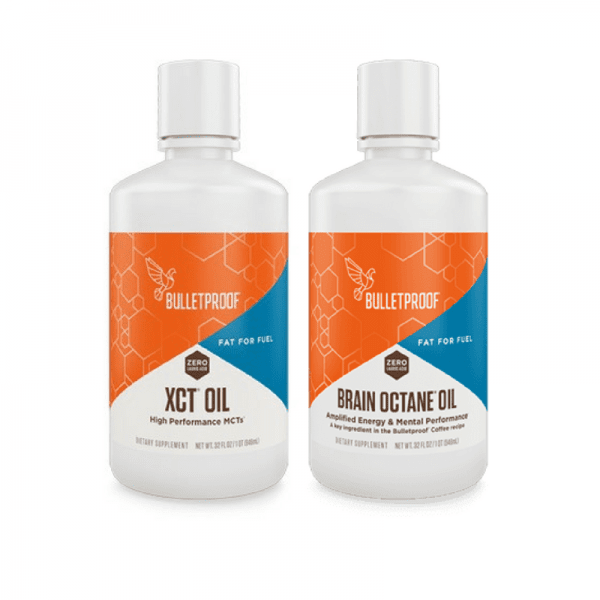 Zak:                All right. Our first question comes from Bodjie. He says, “Hi, Dave. I’ve been using your products for the last six months now. I just want to ask what is the difference between MCT oil, XCT oil and brain octane?

Dave:             This is a thinly veiled … This is actually a question from someone? This isn’t like a marketing question?

There’s four kinds of MCTs that different companies will try and sell us as real MCT just like coconut oil companies but you’re not getting the purest stuff that we’re using from metabolic activation. Now, that’s plain MCT. There’s also problems with just normal commodity MCT that had to do with something called C17. I wrote about this in the Bulletproof Diet book. C17 is an odd chain fat that’s made by less pure processes. If you’ve ever had severe disaster pants after using commodity MCT, there’s a reason for that. Some of it comes from cosmetic machines. Some of it’s imported from China but most of it has the C17 which causes the gastro distress. It happens. You get much less of that from XCT oil.

Now, XCT oil is the two shortest lengths. It’s not all four of the MCTs. It’s just two of them. It’s the C8 and the C10. XCT oil which we usually call the upgraded MCT oil, that stuff is distilled an extra time more than normal MCTs that you’d find on the market. It’s that extra step of distillation and filtering that gets rid of the C17 and the other contaminants so it doesn’t have the same level of GI distress or disaster pants becomes much less of an issue.

XCT oil is more affordable because it has the C8 and the C10. That means you can afford to have it. It’s roughly six times stronger than coconut oil. When you look at the GI distress though, it is harder on the stomach than pure C8 which is our brain octane oil. Brain octane oil is about 6% of what’s in coconut oil. Brain octane goes to energy fastest in the body. When you take that stuff, you feel it up here first. It’s literally octane for your brain. When you take XCT oil, you still get some of the C8 which goes to the brain quickly. The C10 takes more time to get in. You don’t get as big of a boost but it still works.

Compared to putting, say, coconut oil which is what you put in just plain butter coffee that’s not Bulletproof coffee, you’re getting 6% brain octane oil on that. That’s why there’s such a big difference between in the book I read about here’s how to make a commodity butter coffee. You can throw whatever you want in there and you can get some benefit. If you put any fat, even corn oil which I seriously don’t recommend, if you put that in your coffee and you blend it up, it’s not going to taste that good for one thing but at least you’re not binding the antioxidants.

Coffee had these polyphenols and catechins. These things are important for your health. If you put milk in there, the protein from the milk sticks to them and then you don’t get them. There are studies that show a 340% reduction in antioxidants that are bioavailable just by adding milk. Any kind of fat would be an improvement including just coconut oil, including even non-organic like corn-fed butter. That’s not anywhere near Bulletproof. Bulletproof is brain octane or XCT oil, grass-fed butter which preferably is cultured and unsalted. The culturing helps to reduce casein even more and then you add in this XCT or brain octane. That’s what gives you like, “Wow, something just happened in my day.” Hopefully, that’s a good difference.

Zak:                Yeah. When you talk about people that are making a decision about I want to get XCT or brain octane, what are the tangible benefits from a physiological standpoint that they can expect?

Dave:             You get faster and more for your brain when you’re doing C8 versus C10 but you save a few dollars. One of the things that’s really important to me, I don’t think high performances is for rich people. I am willing to invest more. I always have been even when I was living paycheck to paycheck which I had for a lot longer than I’d like to have been, I would prioritize my health.

I had spent money on the things that made me perform well and feel good because it’s a long-term investment. You can put a little bit in now or you can pay your cardiac surgeon later. I do my best to make things affordable. Both of those things will work for Bulletproof coffee and you feel different than if you have coconut oil or you’re putting in a bunch of lauric acid and thinking you’re getting the benefits of a medium-chain triglyceride. You’re not. Eat some coconut oil. Get some lauric acid because lauric acid has some antimicrobial effects. It’s a good thing. It’s not just a medium-chain in the technical definition of what medium-chains do. If it goes through liver, it’s not medium-chain the way we’re using it for biohacking.